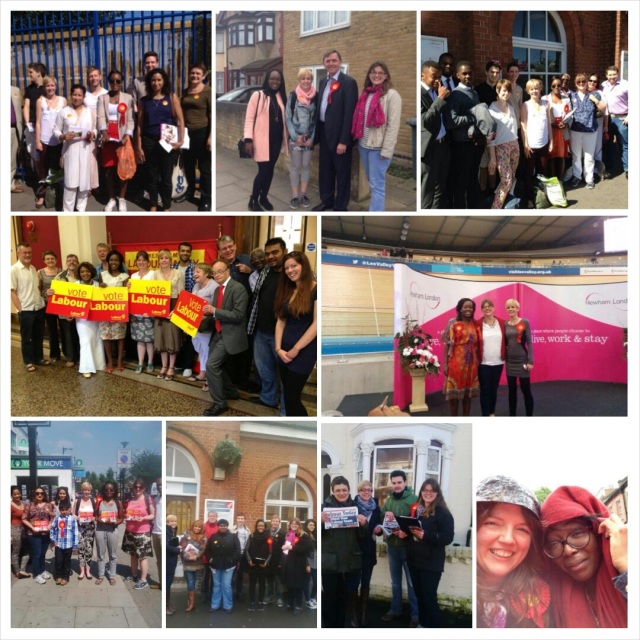 Last Saturday Ellie, Seyi and I met up in the warmth of this current heatwave, and made our way down Field Road, knocking on doors, meeting residents, and asking them for their views. Several people I know expressed surprise when I said we were out canvassing again, so I thought I would write a quick blog post about doorknocking and why we do it.

The first thing that surprised me when I started canvassing was that it’s not actually about convincing people to vote. Obviously if people ask questions about what Labour does, locally or nationally, I will always pipe up with information, and hope that what I tell them will convince them to vote for us. Sometimes I do leave a house with a strong impression that they will vote Labour, because of the things I’ve pointed out that we are committed to. But in fact canvassing is about more than that, and for me it’s really about capturing voting intentions, about meeting residents, and about understanding the ward better.

When I was selected as a new candidate, even though I live in Forest Gate North, I still found that our regular canvassing sessions were invaluable to me in getting to know the ward better.  Unsurprisingly, given my famous lack of sense of direction, I still wouldn’t exactly say I know the place backwards. But going up and down streets, both door knocking and delivering leaflets, has definitely increased my knowledge of the geography of the ward, and improved it immeasurably. Now, as local councillors, this can only be a good thing.

Talking to residents about their experience of living in Forest Gate North also helps with our knowledge of the ward. We often ask residents if they have any questions, comments or concerns, or simply ask them about what their experience is of living where they do. And despite what people say about Londoners, many people are keen to chat and share their thoughts. People tell us about their relationships with neighbours, how long they’ve been where they live, what they think about local services, and more. Parking often comes up. Concerns about litter and fly-tipping are another common area for discussion. This helps us to understand how the ward works, road by road, through the eyes of the residents who live here.

Of course it’s not just a case of listening and learning when resident tell us about things they would like to be improved. Where we can help, we pass this on to colleagues in or outside the Council, and let the resident know what can be done. Although we do hold a weekly surgery in the Gate Library on Saturday mornings, picking up casework in this way on the doorstep is a great way to hear from residents who might not normally contact us. Which is another reason to keep donning comfortable shoes, picking up the clipboard, and getting out and knocking on doors.

I also think  – and this is just my personal opinion –  that once selected as a Labour candidate, especially in Newham where we are so fortunate that our support base has traditionally been strong, it is actively a good thing that you are expected to get out, regularly, and have a regular commitment of canvassing sessions to complete. Without wanting to sound sanctimonious, being a candidate is a privilege, and one that needs to be earned, and that you need to keep working for, and not take for granted. Nothing is certain. So I think the strong focus on canvassing and campaigning and working as part of the agreement when you’re selected feels right to me.

Of course, once an election is approaching, then canvassing becomes a vital way of tracking voting intentions. Depending on how a conversation on the doorstep goes, we will normally end by asking if the resident is normally a Labour voter. (Sometimes this isn’t necessary – sometimes someone will open the door, see our leaflet or rosette and immediately reassure us that they are a supporter! Equally, other people make their voting intentions known very clearly in less positive ways…. ) These voting intentions are recorded so that we can use them locally, by encouraging people who are Labour voters to vote on polling day, and are also fed into national data on voting intentions and patterns of voting.

Door knocking is a rewarding and interesting way of interacting with residents and hearing their ideas. But it is very labour intensive and time-consuming. Meaning that the only way to ensure we get around all the ward is to keep going: to keep canvassing and knocking and talking. This means we can talk to as many residents as possible, and not just restrict ourselves to the relatively small number who we can speak to in the run-up to an election.

Which is a very long-winded way of saying – THAT is why, on a hot Saturday when most people were sitting at home enjoying the weather, Ellie, Seyi and I were instead walking up and down Field Road. It was a good session, actually. And not long now until the General Election, either….

This entry was posted in Uncategorized. Bookmark the permalink.