A walkabout in Maryland

Just over a week ago, Seyi, Ellie and I did a Saturday afternoon walkabout on the Maryland side of the ward.

We have been talking for some time about not neglecting the very western side of our ward. Forest Gate North is a strangely shaped ward if you spend time examining it on a map, which I am willing to admit most people with things to do will not. (If you fancy it, the map is here.) It’s long and thin, extending further to the East towards Stratford than the name would suggest. To a certain extent, ward boundaries are always arbitrary, as they are polling districts and don’t represent what are sometimes called ‘natural geographies’. Which is to say, you may live in Forest Gate North ward, but describe where you live as ‘Forest Gate’, but elsewhere in the ward you might think of yourself as living in ‘Stratford’, ‘Maryland’, or even, to use the newest piece of putative estate agent parlance, ‘Wanstead Corner‘. None of this is a problem, necessarily, all that matters is as far as possible people have equitable access to services and information.

It is very exciting to see resident-led regeneration happening over on the eastern side of our ward, and we want to offer as much support as we can to things like Woodgrange market, and the community garden. But we really want to make sure that we take some time to connect with people in all areas of the ward, and particularly with those people who might not contact us proactively.

With that in mind, we set off to walk up Leytonstone High Road, on the very eastern side of the ward, to introduce ourselves to as many of the businesses along the road as we could. We also delivered some more of our leaflets with our surgery details to the roads around there, a handy chance to walk up and down the streets, taking in any physical issues, and giving residents a quick reminder that we are there if they need us for signposting, support or information. 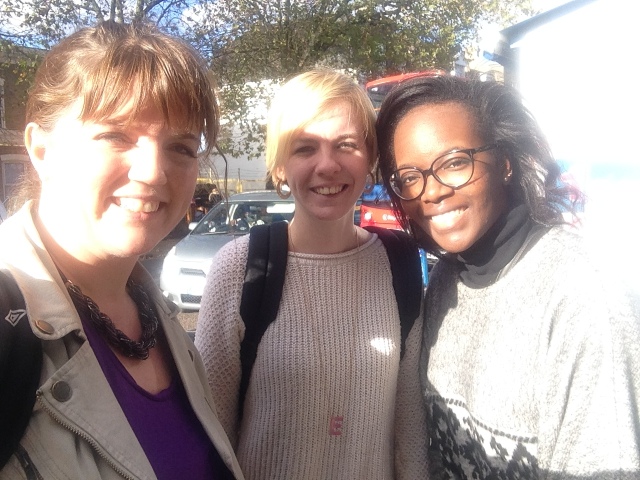 It was a good afternoon, although I’ll confess we were all shattered by the end. Business owners were pleased to see us, although some initial reactions ranged from confusion to bemusement. We reflected again on how our diversity and range of languages in Newham is both a strength and a challenge as we explained that no, although we were talking about holding ‘surgeries‘, we weren’t in fact doctors, and we went right back to basics with some shop owners, talking about what the Council does, who we are, and why we do it.

It was a great opportunity to pick up issues and comments and to make contacts that we wouldn’t otherwise make. We took away some specific casework concerning the junction of Gurney Road and Leystonstone Road, spoke to people who were complaining about shops selling fruit and vegetables out on the street, and to someone who wanted to do more of it. We found another fly tipping hot spot, ready to feed into our I Heart Forest Gate Campaign, and we handed over business cards and leaflets, telling people that even if they couldn’t think of something right there and then, we are always available for their comments.

By far the biggest and most consistent issue that the businesses raised was the condition of the road and pavement. This included litter, but also the physical condition of the pavement. The first shop owner we spoke to was very vocal about this, took us outside his shop to show us the areas he was concerned about, and specifically mentioned the border with Waltham Forest which is very close to the area we were in.

When we stood on the eastern side of Leytonstone Road, and looked over the junction into Waltham Forest, I am sorry to report that the visible difference was striking. This was a sobering moment, as all the social and societal factors that affect, for example, the rates of littering in Newham, are evidently exactly the same on one side of the road as they are on the other. It also appeared that the pavements were physically in better condition just on the other side of the borough boundary, as well. As we stood there, rather glumly taking this in, we wondered whether it might partly be a question of when exactly the road sweepers did their rounds. This led to an inadvertant moment of comedy as we spotted a street sweeper on the other side of the road, and spent a minute loitering in what was probably a very obvious way, trying to surreptitiously catch a glimpse of the letters on the back of his hi-vis jacket, all the while hoping that he would be Newham (he was!).

We have heard that Waltham Forest have been successful in bidding for some money specifically for streets and high streets, and talked about finding out more about this, which might also account for some of the contrast. But we left knowing we’d made some good contacts, collected some casework…. and had plenty more still to do.

Next steps for us, then are to follow up the casework, let the shop owners know that we have done so, to find out whether Leytonstone High Road is counted as a ‘high street’ within Newham, whether this is possible, and whether if it were, this would make a difference to how it is maintained, and to find out more about Waltham Forest’s evident success in physically regenerating high streets, and whether there is something here we could replicate. As ever, no easy solutions here, but we will keep on pursuing it, and keep reporting back to you.